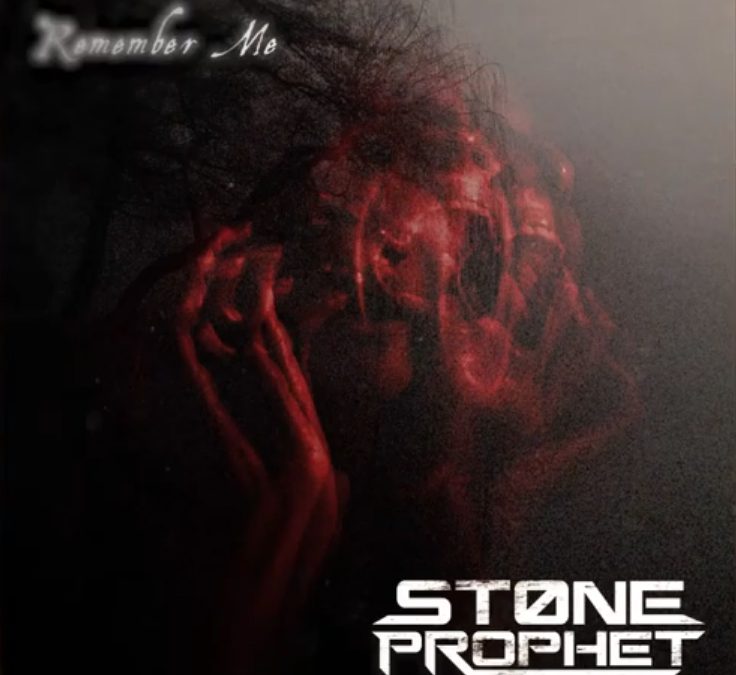 Listen to the highly anticipated single Remember Me released April 7th, 2020. “Remember Me” is available on digital streaming platforms such as iTunes, Apple Music, Spotify, Deezer, Tidal and Google Play. You can purchase it on Amazon Digital.

A U.S. rock band based out of Boise, Idaho, Stone Prophet runs the gamete from hard rock to classical in their backgrounds. The five members of Stone Prophet have musical histories spanning decades, enjoying eclectic genres and composition. Using a mix of hard/heavy rock, jazz, metal, funk, punk, alternative rock and classical styles brought by each member, the music and lyrics they produce are relevant and powerful. It is easy to see how so many fans are connecting with Stone Prophet, relating to their authenticity and emotion.

To find out more about “Stone Prophet”, check out the official band page here.
To receive new song releases as they become available, subscribe to our newsletter below or click here!

Once held a name
Time since erased
Lost in a memory

Back to the Future.

Rock band “Stone Prophet” was formed in July of 2016 by Christopher Jansen (Guitar/Keys/Backup Vocals) and Jeremy Sutherland​ (Lead Vocals). The band name is reminiscent of the fact that civilizations needs to clean up its act as a collective body. What better way to spread the message with Rock Music as its ambassador? “The way forward is to learn from our past” says band co-founder Jeremy. The band’s message of social wisdom is also audible in the band’s music style, which builds on the great musical achievements of Rock Music and fuses it with elements of Metal Rock, still evolving as we speak.

“From the ashes we are new but not ones to learn from our past mistakes. As in ancient times, we too have a message. One of hope, of kindness and of liberation. Hence, the name – Stone Prophet.” the band writes. The message inherent in all of Stone Prophets song releases is very personalistic, with the purposes of being co-constituted in the mind of the listener. As such, the band’s lyrics and music are only intended as a starting point, a sonic beginning meant to kick of an evolving process of human thought and reflection.

“Many of our song lyrics are not typically written at face value and usually hold many different interpretations that change with the listeners viewpoint and personal experiences.” The band said. A good example of this difference of interpretation is the band’s song called Spiral. This song has interpreted to be about anything from a warning of our demise or seen as a song of hope and the salvation of God. The band added, “No answer is right or wrong, but it leads to a conversation about the music which is why we do it.”

When asked about what hardships or triumphs the band has faced, they gave an amazing answer that simply cannot be paraphrased:

“In the end, you’ll never achieve perfection. And therein lies the beauty of what we do. We are a collection of far-less-than-perfect guys, trying to do the best we can with what talent we have. Anyone can learn the basics of what we do. But, great chemistry – that’s a rare thing and much harder to come by. We trust each other. Hardships are part of life. Each one of us has a different way of dealing with the ups and downs. We provide for each other. Success is defined one individual at a time. If we can make someone laugh or move someone with the music we create, that’s a triumph.”

The two founding members of the band both starting music at an early stage. Jeremy began playing the guitar at age 15, learning to play his favorite Metallica and Megadeth songs. His career as a vocalist started a few years later, when his friends encouraged him to start singing. Chris was an early bird, learning to play the piano at age 3. Band member Steve began his musical career at age 10, when he was gifted an acoustic guitar for Christmas, but never lost his view for his favorite instrument, the drums.

Sean also started playing his first instrument at 10, discovering the many intricacies of the songs and the joy of learning to play them well. His passion for music led him to purchase a guitar a few years later and he has never turned back! Jonny holds a Bachelor of Science in Music Production and is a songwriter, producer, engineer, and multi-instrumentalist. He began his musical endeavors at a young age. He was born into a religious and musical home. Jonny is also a self-taught guitarist, bassist and drummer. Together they form the band stone prophet. To find out more about the career of each member, check out the official band page here.

“If you are looking for a band that at its core loves the local music scene, loves their fans and loves each other Stone Prophet is that band. This is an amazingly complex band that allows themselves to be themselves. They do not work to emulate other types of music they simply work hard to put music out that speaks to themselves and they work hard to create music that speaks to the audience. The band takes what is happening in the world, their community and from within to make songs that are truly from the heart.” say Aaron and Amanda from MusicMonday208, a music blog site dedicated to the many aspects of the amazing local Idaho music scene.

To receive new song releases when they become available, please do not forget to subscribe below.

Read more about the band at MusicMonday208.